Tennis has the unique ability to serve as an individual or team sport, one of the few, if not only, sports to claim this. Through the many opportunities the sport provides, there is room for both personal and team development.

Katie Finke, USTA/Midwest Section Tennis Ambassador, knows the ins and outs of the sport well and how it has the power to shape relationships. From an early age, Finke remembers being on the tennis court. Growing up in Atlanta, tennis was a way of life. Finke began involving herself more and more in different tournaments around the area throughout her childhood and high school years.

Finke’s father was constantly with her through every new phase of her tennis career. When he passed away during her junior year of high school, Finke decided it was time to take a break from tennis and focus on the possibility of continuing her running career in college, a sport she had just begun.

Following graduation from Georgia Tech and a successful running career, Finke felt that pull once more to the tennis court. She knew that her competitive running days were over, and she needed something to fil that competitive void within her.

At the time her college days ended, Finke was still in Atlanta, but she would soon embark on not one, not two, but three different moves to different cities. Through all of the new towns and faces, one thing remained constant: her tennis involvement.

“Each time we moved, and I look back at some of the greatest friends I’ve made in all of the different places, they were my tennis friends,” said Finke.

“...I’ve always looked at tennis as a great form of exercise, but also a way to socialize at the same time.”

Finke and her family have finally settled in Naperville, Illinois, and she is more involved with tennis than ever.

When Finke first got to Naperville, she immediately joined the local tennis club, Five Star Tennis Center, and started participating in anything and everything she could. Though she did not quite realize it, she had already become an important promotor of tennis in the community. So, as the Ambassador program was rolled out, it was a natural fit for Finke.

“I did continue what I was doing, but it just made me more eager to go out and promote tennis,” said Finke.

As Finke became more and more familiar with the area and what the community was looking for with tennis, she started taking names. She wrote down every name she came across with even an inkling of interest in the game. It was her goal to get as many individuals involved with tennis as possible, whether that was for the first time or reintroducing the game.

In addition to bringing more and more people to the game of tennis, Finke has stepped into the role of coordinator for one of the club’s biggest initiatives: Buddy Up Tennis. The program started in Ohio, but Finke was responsible for launching it in Naperville. Inspired by the mission of the program, Finke believed it would not only be great for the community but for her own family as well. Finke’s son, who has Down Syndrome, and his twin brother play in the adaptive program every year.

Finke’s entire family champions the event, where it has grown significantly over the years.

“A lot of our volunteers are tennis players at Five Star, and they have seen the program from the start,” said Finke. “It’s really neat to build this big community and make new friends through the sport of tennis.”

Finke hopes to continue to inspire those around her to pick up a tennis racket, whether it be for the first time looking for a community or a return to the sport they love.  For Finke, tennis has become woven into the fabric of her life, and she would not have it any other way.

“It’s something where I can challenge myself,” said Finke. “I also love that it can be an individual sport or a team sport, and I feel like when I get on the court, I am there focused on the game and not so much about getting exercise.

“When it’s all said and done, you’ve gotten a great workout, plus you feel so much better afterwards.”

Katie's son, Owen, loves participating in the Buddy Up program.

Katie and her husband, Michael, love to play in social tennis mixers to keep active.

Not only is Katie's son, Owen, into tennis, but his twin brother, Jake, also plays.

Katie says that tennis keeps her active and invovled in her community.

Five Star Tennis is Katie's home club and where she is extremely active.

Jake and Owen are big fans of tennis, just like their mom. 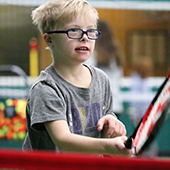