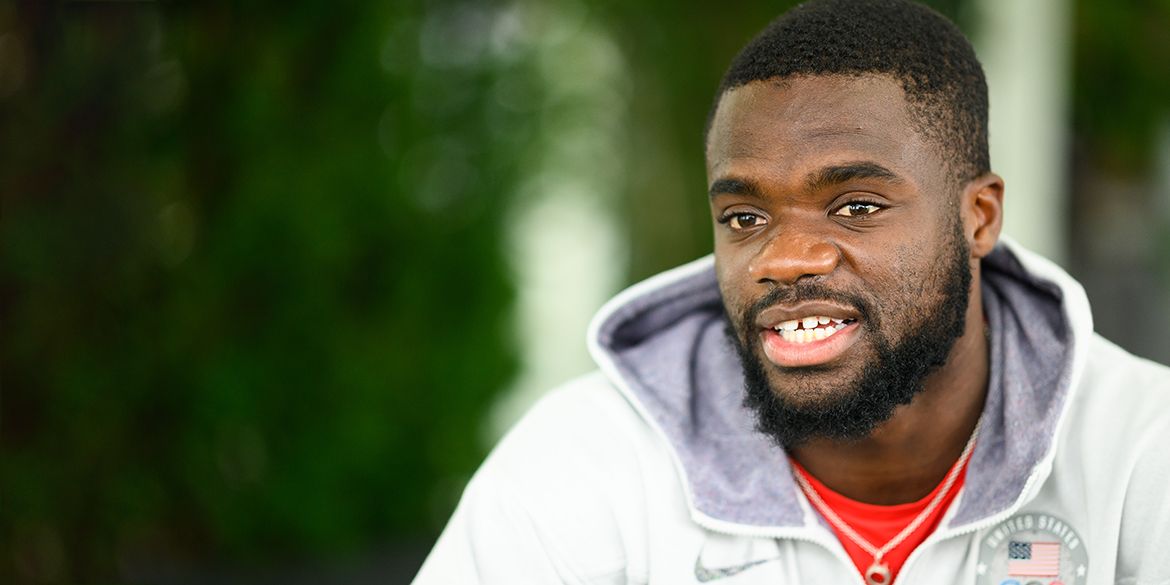 After getting a win in his Olympic debut at the Tokyo 2020 Games, Frances Tiafoe has returned to the U.S. for the Citi Open as he begins his 2021 US Open Series campaign. The Washington, D.C., event is Tiafoe's hometown tournament, as the Maryland native grew up in the "DMV" area (D.C., Maryland, Virginia) and spent his youth at the JTCC, a USTA NJTL in his home state.

The 23-year-old will be competing at the ATP 500 event for the fifth time, with two Round-of-16 appearances representing his best performances to date on the hard courts. Tiafoe's recent form sees him enter full of confidence—a strong grasss-court season included an ATP Challenger title in Nottingham, U.K., before reaching the quarterfinals at Queen's Club and the third round at Wimbledon, where he upset No. 3 seed Stefanos Tsitsipas in the opening round.

Ahead of his D.C. return, Tiafoe sat down with the media for a Zoom press conference. Read on for his thoughts on the Olympics, inspiring local kids, Rafael Nadal, Novak Djokovic, mental health and more.

Q. You just came back from the Olympics in Tokyo. How would you describe your experience?

Frances Tiafoe: The Olympics was a great experience. I'm happy I did it. Obviously I hope I can go again some years to see other sports, kind of enjoy a little bit more the experience.

All in all, it was really cool seeing the village, seeing all the other athletes, the opening ceremony. Met a lot of people. It was pretty cool. Definitely something I'm glad to say I achieved that, I'm an Olympian, something that really can't be taken from me. That's pretty cool.

Q. You're a role model to so many young players in the USTA Mid-Atlantic section, a hometown hero. What advice would you give to juniors who dream of being on the pro tour?

Frances Tiafoe: Obviously to keep playing as much tennis as you can, keep sticking to your progress every day, have goals. When you achieve those goals, keep trying to strive for more. Yeah, I mean, never think any dream is too big. I think everything is achievable if you really put your mind to it. Ultimately, day to day, play as much tennis as you can and enjoy the game. Those two things.

Hopefully we can see more Mid-Atlantic players on the tour. That's the plan.

Q. As a local product from Maryland and the D.C. area, and having grown up training at the JTCC... how important is having this tournament in D.C. to local players, to have something to aspire to, even for yourself as a kid watching maybe Andy Roddick winning this event when you were younger?

Frances Tiafoe: Yeah, I mean, this tournament's big. I mean, for guys around the area, to see pro players, this is the real thing. Coming here and seeing del Potro win here, seeing James Blake, all these guys coming and playing here, legends, Lleyton Hewitt. You're like, 'Wow, I can maybe play with these guys one day, even be in the same locker room as these guys.'

I think those experiences definitely helped me to be the man I am today. I love this tournament being here, and I hope it can be here for years and years to come.

Q. Last summer there was a limited opportunity to play North American hard court events. When you did play, there were no fans at all. You're now back in the United States, getting to play in front of a home D.C. crowd. Throughout this summer, how excited are you to get back out there playing in front of American fans?

Frances Tiafoe: Yeah, it's big. Just love that. Especially here, walking around the grounds and everything, you feel the energy. They are going to get super behind me all week. It's going to be a super fun week. I'm really excited. Hopefully I can go for a nice run here. That would definitely mean a lot to me. This is one of my staples of the year, so I'm ready for it.

Q. What sort of difference will it make having full crowds back in New York after playing at last year's US Open with empty stands? Also, looking ahead to the US Open, I wanted to ask you about what Novak Djokovic is going to try to do there, win all four Grand Slam tournaments in one year, whether that just sort of has always seemed like an impossible task. What quality or trait of Novak's do you think is most important for him as he tries to complete that calendar Grand Slam in New York?

Frances Tiafoe: Yeah, I mean, playing in front of fans in New York is going to be crazy. I can't wait. They're some of the better fans, going to be going crazy, especially at night. Atmosphere will be great. I think all the players are super excited for it. That's something I'm really looking forward to. At Wimbledon, having fans back like that, it was unbelievable to play, that's what you work for.

Novak, I mean, the guy's special, man. He can play all on all surfaces, he's moving so well, his serve has gotten a lot better. Mentally, just the toughest in the world. Not necessarily he has the best forehand, backhand or whatever, just mentally he's so, so good.

As you raise your level, he's going to keep raising it, keep raising it, really make you beat him. He goes to a place that people just don't quite want to go to it seems like. He's always got an answer for you. He's on the be brink of achieving something crazy special. As much as I love seeing greatness, I'd like it to stop, someone else win, preferably me. We'll see how it goes in the end.

Q. You practiced with Rafa back in 2014. Did you think he would still be playing at such an incredibly high level seven years later?

Frances Tiafoe: Yeah, he's been at a crazy high level. It's pretty cool to see, pretty cool he's still playing, obviously. All the young guys have played him numerous times. It's just unbelievable that he came here to D.C. Having a player of his caliber here is pretty legendary.

Q. If you look at your statistics over the last 52 weeks, a lot of them are at career highs for you. Yet if you look at the ranking, No. 54, it's a little bit off still your career high of No. 29. What are you looking forward to in terms of this summer hard-court season as an opportunity to perhaps build back up that ranking, get back towards your career high?

Frances Tiafoe: I think I've been playing great tennis. Honestly, I've just got to keep staying at where I'm staying at. I've been winning a lot of matches lately, a lot more convincingly as well.

The rankings right now are obviously tough, as well [with the changed due to COVID-19]. They're not really showing how well you're actually playing. But I think everyone's in the same boat. I think if I can keep having more consistent weeks back to back, I'll be all right.

Why not? I mean, I've put some good matches in on grass, feeling good, feeling less jet lag from the Olympics now. By the time I go, I'll be ready to go.

Q. When you say it's the best you've felt in a while, that's contributed to that?

Frances Tiafoe: I mean, all in all my game, I won Nottingham, quarters of Queen's, the run at Wimbledon... I haven't won that many consecutive matches in a long time. I think I can play well, but so sporadically. To have that many wins in a short span was really nice. To beat a high-caliber player in a major, and very much so convincingly... That gives you a lot of confidence.

I'm just ready for what's next. Hopefully I can keep on this road. Also I'm extremely happy right now just in general.

Q. Mental health has become a big issue with Naomi Osaka, Simone Biles. Do you think in a way it's good that that's out there, athletes are people too, that you all need to focus on mental health like everybody else in the world?

But, yeah, I mean, we matter just as next as the much person, as the ordinary person. We're human. We're going to have mood swings, personal things go on that may affect our day to day. Being open about it, talking about it, I think is huge.