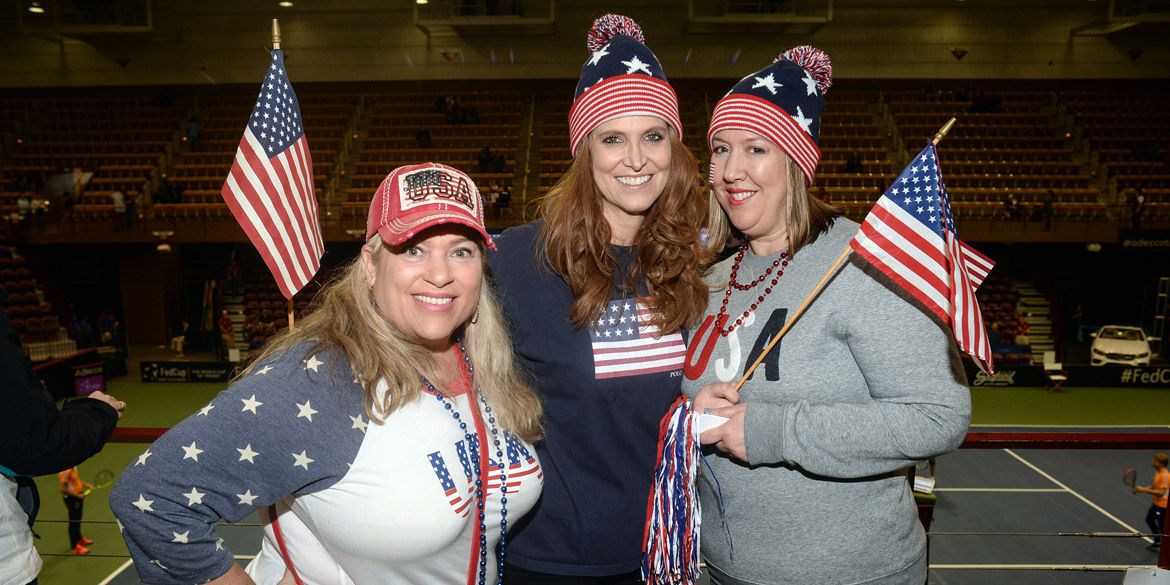 Team USA will return to Asheville, N.C., when the U.S. Cellular Center hosts the 2019 Fed Cup first-round tie against Australia in February.

The venue will become the first repeat host site for the U.S. Fed Cup team in more than a decade when captain Kathy Rinaldi’s squad gets its 2019 campaign underway on Feb. 9-10.

Tickets go on sale to the general public on Nov. 2. Two-day ticket packages for both Saturday and Sunday will be sold at prices ranging from $50 to $250, or $25 to $125 per day. Single-day tickets for Saturday or Sunday will be sold with prices ranging from $30 to $135 per day. USTA members will have the opportunity to purchase tickets in advance through an exclusive presale beginning Oct. 30 and running through Nov. 1, or while supplies last.  Click here for tickets.

Asheville hosted the 2018 first-round tie against the Netherlands this February, and the response from the community during the weeklong celebration of tennis was so positive that the USTA decided to return. ADVERTISEMENT The most recent site to host consecutive Fed Cup ties in the U.S. was the Delray Beach Tennis Center in Florida in 2005 and 2007.

Earlier this year, the first-round tie in Asheville generated an estimated $3.5 million economic impact for the area, and sellout crowds saw the U.S. defeat the Netherlands to begin its 2018 Fed Cup title defense.

"We couldn’t be happier to be bringing Fed Cup back to Asheville,” said USTA Chairman of the Board and President Katrina Adams. "Everything about the First Round tie vs. the Netherlands earlier this year was incredible, from our local business partners to the staff at the U.S. Cellular Center to the local volunteers and the enthusiastic community that cheered us on to victory. Asheville made for a perfect Fed Cup host, and we look forward to coming back.”

Team USA will be hoping the Fed Cup trophy is still on American soil when the team touches down in North Carolina in 2019, as Rinaldi’s team will attempt to win its second straight championship next month when it faces the Czech Republic in Prague, Nov. 10-11.

The 2019 first round against Australia – a best-of-five match series – begins Saturday, Feb. 9, with two singles matches. Two reverse singles matches and the doubles match will follow on Sunday, Feb. 10. Matches will be played on a temporary indoor hard court. The winner of this matchup will advance to the semifinals, to be played April 20-21.

The USTA has partnered with Explore Asheville, Ingles Markets, Mercedes Benz of Asheville and the Omni Grove Park Inn to bring this event to Asheville.

“I'm honored that Asheville has been chosen to host the Fed Cup for the second year in a row,” Asheville Mayor Esther Manheimer said. “What a great opportunity to see these top athletes compete live, right here in downtown Asheville.”

Added U.S. Cellular Center General Manager Chris Corl: "The U.S. Cellular Center is honored to play host to this first-round Fed Cup event for the second year in a row. The community support and professionalism of the USTA staff, contractors, sponsors and local organizing committee, all of whom came together to make this event successful in 2018, was unprecedented here in Asheville. We are looking forward to doing it again in a bigger and better way."

The site selection is subject to final approval by the ITF.