'Ready to roll' at Wimbledon 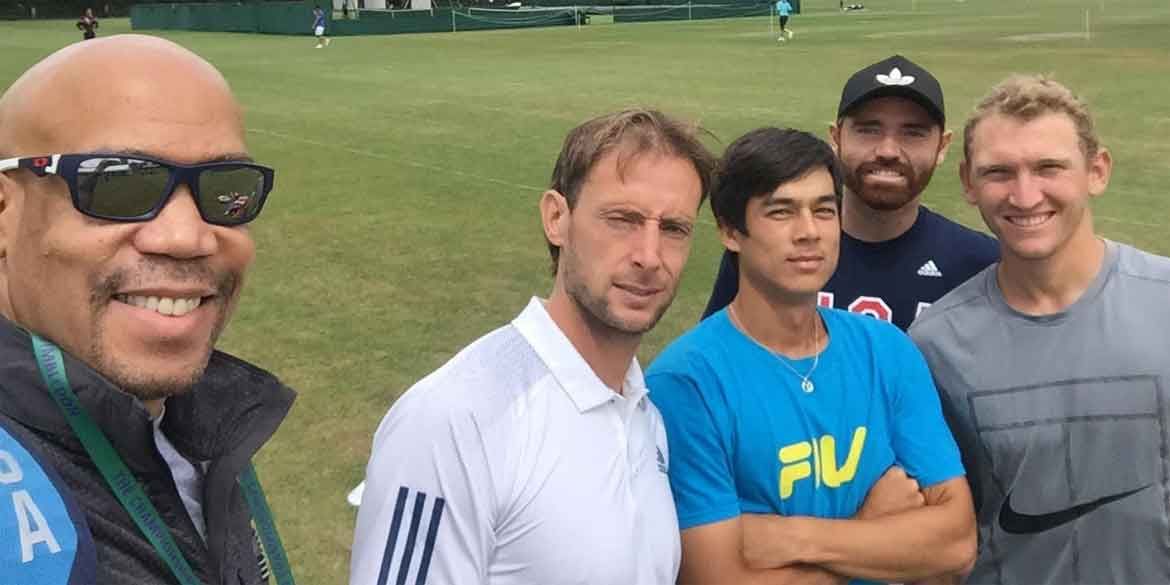 Bjorn Fratangelo, 23, broke into the ATP's Top 100 and reached a career-high ranking of No. 99 on June 6, 2016, after advancing to the Roland Garros second round. Fratangelo (pictured above, second from right), who is now ranked No. 123 in the world, turned pro in 2012 and since then has won 10 USTA Pro Circuit and ITF-level singles titles. As a junior, the Pittsburgh native reached No. 2 in the ITF World Junior Rankings and became the first American since John McEnroe in 1977 to win the French Open boys’ singles title. Fratangelo, who is named after tennis legend Bjorn Borg, is currently in England getting ready to compete in the Wimbledon qualifying draw. In his blog below, he talks about his preparation for the year's grass-court Slam, how he feels about playing on grass and much more.

Hi everybody. ADVERTISEMENT I’m writing to you all from Wimbledon! Just here to give you a bit of insight on how my time has been here. So far, I don’t have much to share, as I just arrived last night from a Challenger event in Ilkley. I made the quarterfinals there and also the week before in Nottingham. I have plenty of grass-court matches under my belt, so I feel like I’m well prepared for qualifying.

Qualifying for the Championships last year may have been the best feeling of my young career. I won’t lie... it's not my favorite surface to play on, but last year I made a deal with my coach, Brad Stine, and also Tom Gullikson to play all the grass events before Wimbledon. In 2015, I played on clay up until it was time for the qualifying rounds (my first time on grass... it didn’t go so well). Brad and Gully really wanted me to embrace grass-court tennis, and I rose to the challenge and got to walk the grounds of the All England Club. Unfortunately, I was dealt with a tough draw in Grigor Dimitrov, but it was still a great experience.

Wimbledon qualifying is a bit different than the other Slams because they play the matches off site at Roehampton. It has a slightly different feel. All the courts are in a long row, but you’re still wearing all white, and it still has the proper “English feel” to it.

Today was a lighter day for me since I just played yesterday and also am playing my first round tomorrow, so I did a little extended warm up with my long-time strength coach, Gabriel Echevarria, who has been a big part of my career since I basically turned pro. Then I had a practice with Next Gen sensation and future model Taylor Fritz and did a bit of work with my physio, Scott Clark, who I share with a couple of the other American guys.

I’m ready to roll for tomorrow and hoping that I can repeat what I did last year! I’m 2-for-2 in Slam qualies this year. Let’s hope that streak can keep going!

Thanks for reading!
Bjorn

'Ready to roll' at Wimbledon