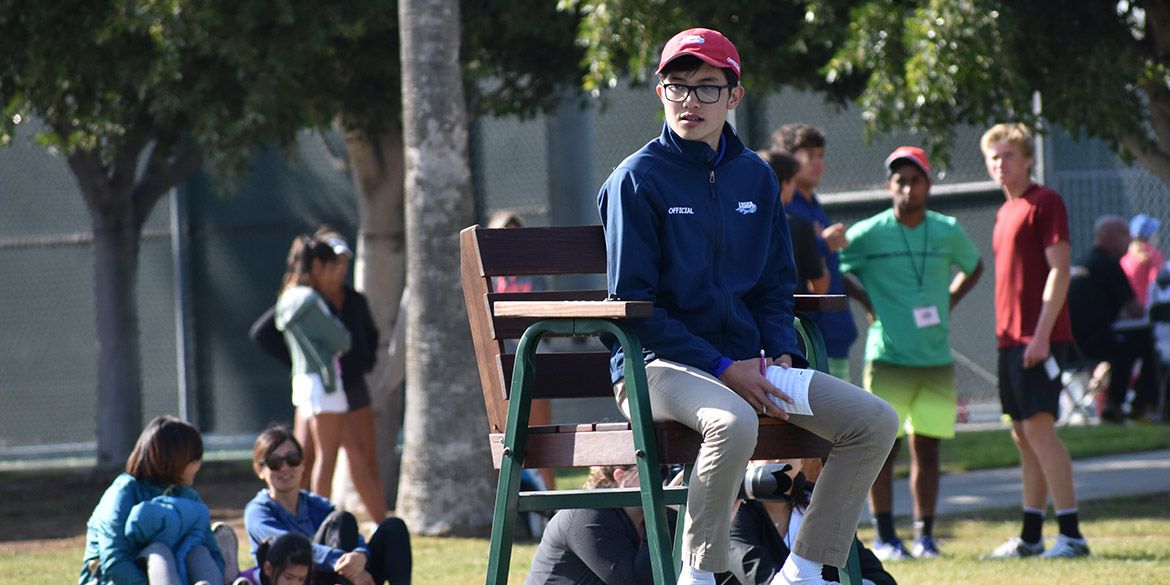 ­­­From collegiate matches in Southern California to the biggest stages at the US Open, Albert Ton has had experience as an official on all kinds of tennis courts—all before his 20th birthday.

Ton’s meteoric rise in the officiating ranks on the West Coast began while he was still a student-athlete at Fountain Valley High School, where he proved to be prodigious both in the classroom and on the court.

First accepted to college in the 10th grade, Ton ultimately matriculated at the University of California, Berkeley in the summer of 2017 with enough credits to be considered a junior in academic standing.

He was just as much of a quick study as an umpire.

“I was just looking for a job to make some money,” he recalled. “My high school coach was actually an official, so he got me into it. I had a lot of fun with the roving at first, and then my friends started to pick up [officiating], as well, so we started doing stuff together.

“I did the Pac-12 Championships when I was 16. I really didn’t expect to be asked, and it was so much fun. It was a chance to see the players and really high-level tennis up close. That was really cool to see. In college, I started doing more events on the weekends, and in 2018, I did the US Open.”

Two years ago, Ton, then just 17, was also selected as the chair umpire for the girls’ 16s singles final at the USTA National Hardcourt Championships in San Diego.

He is believed to be the youngest official to chair a final at a USTA junior national event, and it was then that he had his first experience with something that most officials dread: his name made headlines.

“I had people coming up to me later that year during that college season, asking, ‘Are you the guy from that article?’” he joked.

“I never had an experience like that. It’s just different being praised as an official because you don’t often get that from players or parents. It was kind of funny.”

Routinely the youngest among the other officials—and often, players—on the tennis court, Ton has had the opportunity to work with, and to learn from, mentors every time he sets foot on court at a tournament.

“I’ve had a lot of people supporting me. I had a great support group of people that would help me move up and get assignments that I needed to eventually move up in the ranks,” he said.

“Lots of officials have so many life experiences, and they know what they’re talking about. They can give lessons about pretty much anything, especially those who have so many stories to tell—not just about officiating, but about life and their other experiences.

“I think it’s really cool to have that. In college, you usually just talk to your peers, so to have the chance to talk to people who have those kinds of experiences is really important. I feel like it’s been a part of my growth as a person.”

Ton, now 19, is on track to graduate from Berkeley in December with a degree in computer science, and tennis has never been far removed from his studies.

For a recent university project, for example, he worked on developing scheduling software that could be used by referees at tennis tournaments, and he recently began dabbling in officiating administration himself.

“I really like being a referee now, which is something that I started this past summer,” he said. “I did the USTA Sectional Championships in Southern California, and I had a lot of fun with that.

“Personally, I really enjoy that side. It gives me the chance to oversee things. I like to use my analytical skills, and this gives me a chance to be able to use my skills most effectively. It makes me work my hardest.”

While he’s unsure where he’ll go next after graduation, Ton knows one thing for sure: he wants to keep officiating at the forefront.

“Even if it’s just roving or college matches on the weekends, officiating gives me a chance to give back to the sport,” he said.

“Tennis gave me a community back home and the chance to be able to contribute back to it. To make an impact is exciting for me and important to me. I think that officiating will always be some part of my life.

Ton also recommends that other young people with a passion for tennis consider various paths in officiating as viable pursuits.

“I think officiating is something that’s incredibly exciting,” he said. “For most kids in high school, if they’re not going to college [to play] or something, it’s a great opportunity to stay in the game.

“If they’re willing to take the time and put in the effort, they have the chance to meet some incredible people, watch tennis at its highest level and have so much fun.”