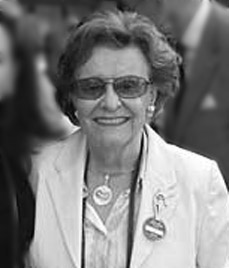 Nancy P. Jeffett, an impactful tennis industry leader who was instrumental in advancing women's professional tennis and in developing opportunities for promising junior players, passed away peacefully on July 6. Jeffett was 88 years old. In recognition of her immense contributions to growing the sport, Jeffett was inducted into the International Tennis Hall of Fame in 2015.

In 1972, Jeffett made history when she facilitated the first ever network broadcast of women's tennis, dramatically boosting the profile of the sport and growing interest in women's tennis.

A determined promoter and savvy businesswoman, Jeffett refused to take "no for an answer when she was told "no one would pay to watch women's tennis or tune in on television." In 1969, she became one of the first female tennis promoters in the sport when she staged the inaugural Maureen (Mo) Connolly Brinker Memorial Tournament. ADVERTISEMENT In 1972, in addition to having the first-ever telecast, it became the first tournament to award prize money to its winners. The tournament evolved to become the Virginia Slims of Dallas, one of the most popular and important events in the early years of the WTA Tour.

In 1968, Jeffett joined forces with her good friend Mo Connolly, a then recently retired nine-time Grand Slam singles champion, to co-found the Maureen Connolly Brinker Tennis Foundation (MCBTF), with the goal of building tennis programming to engage more people with the sport, especially children and those from lower socio-economic backgrounds. Following Connolly's death in 1969, Jeffett spearheaded the organization that has since contributed millions of dollars to player development-from tennis programs in public parks to professional tournaments. A cornerstone of Jeffett's junior tennis efforts was focused on creating opportunities for promising young players. Over the years, MCBTF has also staged numerous international junior competitions in the United States, Great Britain, and Australia, creating opportunities for young players to gain competitive experience.

Jeffett has been recognized worldwide for her commitment to the sport of tennis. In 1970, she was the recipient of the prestigious USTA Service Bowl. In 2007, Jeffett was honored with the Golden Achievement Award, given jointly by the International Tennis Hall of Fame and the International Tennis Federation in recognition of her commitment to growing tennis worldwide. She is an Honorary Member of the All England Lawn Tennis and Croquet Club, having been elected for her services to international tennis. She is the only American woman who is not a Wimbledon champion to have received this honor.

Jeffett's love for the sport developed from a young age. Born in St. Louis, Missouri, Jeffett was an accomplished all-court player who rose to No. 10 nationally in the USLTA Girls' 18 division in 1946. She parlayed that success into becoming the USLTA/Missouri Singles, Doubles and Mixed Doubles champion in 1948. She lived most of her life in Texas, where she founded the Tyler (Texas) Tennis Association in 1954 and later became the Chairman of the Texas Tennis Junior Development Program (1960-82). She was inducted into the Texas Tennis Hall of Fame in 1983 and then later into the St. Louis Tennis Hall of Fame in 1999.

Nancy is survived by her loving family, which includes her daughter, Elizabeth P. (Sissy) Jeffett; her son, William F. Jeffett and his fiancé Margaret Metras; her grandchildren Austin Jeffett Smith and Katharine Marguerite Smith; her son-in-law, Charles F. Smith, Jr.; and her sister-in-law Ann Pearce, along with a host of dear friends in the international tennis world.

A memorial service will be held on Friday, July 14 in Dallas at St. Michael and All Angels Church at 4:30 pm. In lieu of flowers, Nancy Jeffett's family has requested that donations be made in her memory to the International Tennis Hall of Fame or the Maureen Connolly Brinker Tennis Foundation.