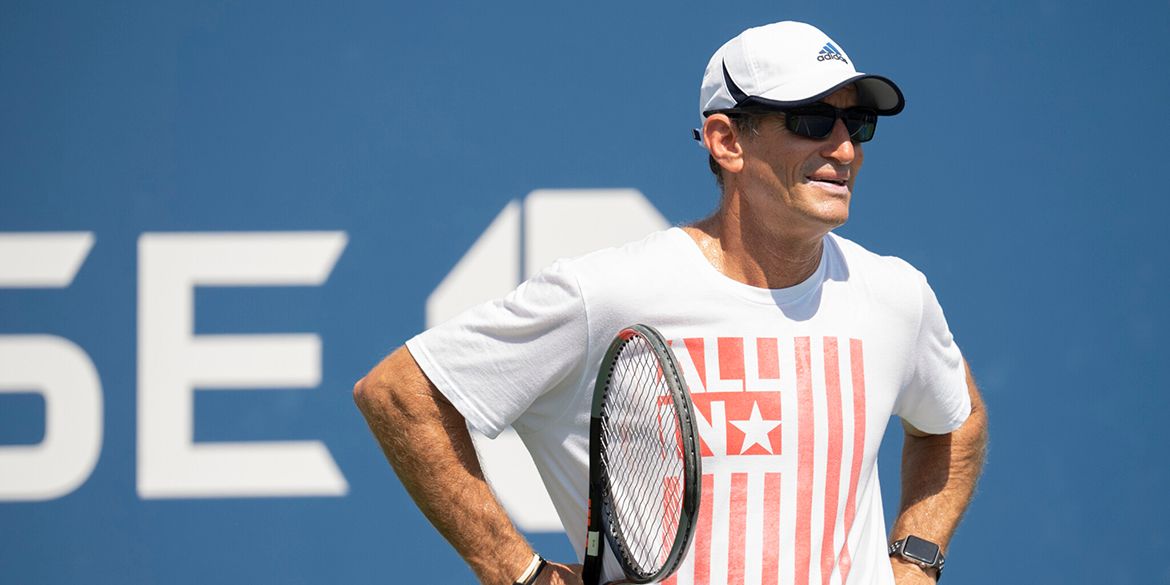 When Andy Roddick and Mardy Fish wanted to spend a night in the Olympic Village at the 2004 Athens Games, there was one small problem. The American team was staying at a nearby hotel, and athletes could not stay in the village without a coach.

“For me, that’s what the Olympics is all about,” said the longtime coach, who got a late call to join men’s captain Patrick McEnroe as an assistant coach in Greece.

The trio enjoyed the experience so much that they decided to stay in the village for the entirety of the Games. With each claiming one of four bedrooms, the extra room played host to a revolving cast of American stars from Venus Williams to Vince Spadea, plus a joint-visit from Bob and Mike Bryan.

Fish went on to win silver in men’s singles, while Roddick lost in Round 3. But Goldfine made a strong impression on everyone, perhaps no one more so than Roddick, who was the reigning US Open singles champion at the time.

“That’s how I got to know Andy,” Goldfine said of their Olympic experience. The pair’s budding friendship, which grew as the Chicago-born coach joined the U.S. Davis Cup coaching staff for the tail-end of the team’s run to the 2004 final, soon turned into a full-time coaching relationship.

When Roddick parted ways with Brad Gilbert following the ’04 season, he offered the gig to Goldfine, who was working with USTA Player Development as a high-performance coach out of Key Biscane, Fla, at the time.

“I really enjoyed my time at the USTA, but obviously the opportunity to work with the No. 2 player in the world—and someone who I was friends with and I really got along with—was something I couldn’t pass up.”

Roddick won five titles and reached the 2005 Wimbledon final under Goldfine’s guidance. Earlier in his coaching career, Goldfine had similar success with another good friend who also happened to be an American great: Todd Martin, with whom he worked from 1996-2002.

In ’95, Goldfine was coaching the doubles duo of Patrick Galbraith (now USTA Immediate Past President) and Canadian Grant Connell, who had been his roommate at Texas A&M—a pair that would go on to win the 1995 ATP Finals doubles title. Martin was part of a larger group of friends that often spent time together on tour. When he was looking for a new coach, he thought of Goldfine.

“The great thing with all these people is that we had relationships before and were friends and we knew each other,” Goldfine explained, “which helps a lot because you didn't have to go through that period of getting to know each other. We knew we got along and knew we had a lot of the same interests.

“With coaching, it's important to have some of the same interests, things that you can talk about and relate to each other on.”

These prior relationships also made Goldfine’s job easier when it came to having difficult conversations.

Goldfine’s seven years with Martin were highlighted by a standout 1999 season in which the current International Tennis Hall of Fame CEO reached a career-high of world No. 4 behind a run to the US Open final (culminating in an epic five-set defeat to Andre Agassi) and a pair of quarterfinal showings at the Australian Open and Wimbledon.

The theme of friendships morphing into successful coaching partnerships started early for Goldfine. As the cliché goes, relationships are everything, and it’s all about who you know. That golden rule of the business world has served the finance major well in tennis.

A four-year standout at Texas A&M, Goldfine was considering leveraging his degree after three years playing in tennis’ minor leagues from 1987-90.

But a call from Fernandez in the summer of 1990 brought a new option. The American wanted to bring Goldfine on as a hitting partner and coach, to supplement her work with lead coach Tim Gullikson.

Goldfine and Fernandez had become friends in their youth, when they were both coached by Aussie Fred Stolle. With Gullikson scaling back on travel, Goldfine was brought on as a touring coach. At that time, his only coaching experience came during a summer working with competitive German club teams, when he took a break from competing in order to make money to continue traveling.

The adjustment from player to coach was an easy one, thanks to the ideal setup with Fernandez and Gullikson.

“When you talk about Mary Joe Fernandez, you don’t get any nicer than her,” Goldfine said. “And it helped that we already knew each other pretty well and were friends.

“And Tim was the most amazing communicator and teacher,” he added. “He just made it so easy for me. Having those people around me, it was the perfect storm in regards to an easy transition and just being in a great situation.”

Fernandez excelled under the two-coach structure, winning her first WTA titles and reaching the semifinals of the 1990 US Open and the 1991 Australian Open. And just as important, says Goldfine, they were having fun while doing it.

“I was thinking to myself, ‘Jeez, I'm getting paid now, a regular amount,’” he said of his new gig. “It wasn't based on results, and I still got to play tennis every day, which I loved. And I was staying in a lot nicer places than I had when I was playing.

“That’s really how I got into coaching,” Goldfine reflected. “I didn’t really plan on it. It wasn’t something that I thought a lot about. But I think between the way that I hit the ball—I hit a good ball that people can groove on—and I get along with people… then it was just a matter of really using the stuff that I learned from tennis and learning from other coaches.”

Now a coaching veteran of more than 30 years, the 56-year-old Goldfine is back with USTA Player Development as a national coach working out of the National Campus in Orlando, Fla. He spends the bulk of his time with Korda, as well as another 21-year-old in Patrick Kypson. Kypson, a Top-500 player and fellow Texas A&M product, competed in the 2017 US Open main draw as a wild card after winning the boys’ 18s title at that year’s USTA National Championships in Kalamazoo, Mich.

Working with PD gives Goldfine access to a world-class team of different departments, from strength and conditioning to mental conditioning, analytics, physiotherapists and more.

“Our departments really are second to none,” he said, noting the importance of supporting players with “performance teams” for success in the modern game.

When he’s not with Korda and Kypson, Goldfine also assists other PD coaches working with younger players. By doing so, he is not only able to understand and help improve their games, but also sow the seeds of relationships early on, before they progress to an age where he might work with them more extensively.

In many ways, Goldfine has been a paradigm for what we now view as the modern approach to coaching—a style that keys on the give and take of asking questions and discussing ideas, welcoming player input at every turn. This stands in contrast to the more old-school, authoritative approach which left little room for dialogue.

“I like the players that don’t just blindly follow what I say,” he explained. “I want them to question, to ask, ‘Why do you feel that way?’”

For Goldfine, this stems from his easy-going nature and his history of friendships with his players. His experience has taught him to allow players space to make their own discoveries.

“Players are more likely to remember certain cues and make changes if they feel they feel like they are the ones initiating the changes,” he continued. “I’ve had a lot more success in regards to the players really committing to it if they feel like it's their idea.

“Really the one that that got me to do that was Andy. Andy was extremely stubborn, which is a characteristic for a lot of the successful players. You have to be stubborn, but you also have to be willing to listen.

“But he did a really good job, you know, if he felt like he was the one who came up with [an idea]... and he did. I would just kind of help get him there.”

Goldfine’s time with Roddick, the last American man to win a Grand Slam singles title, leaves him well prepared for his current role with Korda. The youngster, who is currently sitting at a career-high ranking of No. 38, made his breakthrough on the ATP Tour this season with a Wimbledon Round-of-16 run and a Miami Open quarterfinal appearance.

Many are tipping Korda as the next big thing in American tennis, and the most likely candidate to end the nation’s Slam drought—including Roddick himself.

“I’ll say it in no uncertain terms,” the former world No. 1 recently commented on Tennis Channel. “This is our best American prospect in a long, long time.”

As part of Korda’s coaching team, which is headed by father and former Australian Open champ Petr Korda, Goldfine spends a lot of time on the road with the phenom. It should come as no surprise that the two men, separated by 35 years of age, have become good friends through their five years of working together, beginning in 2017 when Korda was a top junior.

“We are very, very good friends,” Goldfine said of their relationship. “But he also respects me, and I respect him.”