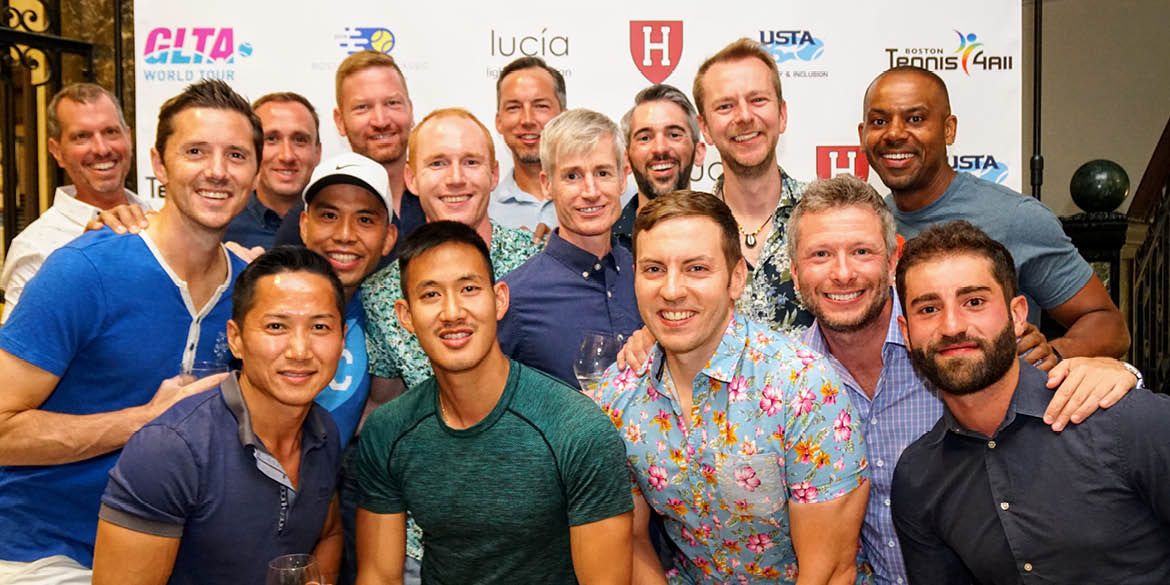 CAMBRIDGE, MA- Beneath a rainbow flag flying high above Harvard University’s Beren Tennis Center, a record 177 players turned out for Tennis4All’s annual Boston Tennis Classic from June 14-16, a GLTA (Gay and Lesbian Tennis Alliance) tournament open to players from around the world. Tennis4All, the Boston based organization that promotes goodwill, fellowship and healthy competition among tennis players in the LGBTQ community, has been running the tournament for the past 20 years throughout the Boston area.

It wasn’t until 2015 however, when Tournament Directors, Ryan Losey, Roman Krasikov and Mike Mercier took over, that the Boston Tennis Classic (formerly the Boston Indoor Tennis Classic) reached new heights.

In 2015, which was also the first year Losey and Krasikov brought the event to Harvard thanks to the direction of Mercier, numbers jumped back up to 95 participants. Every year since, the turnout has increased, and in 2016 and 2018, the tournament was awarded Best Tournament by the GLTA.

“Without a doubt, having the tournament at Havard’s Beren Tennis Center makes this event unique. Not only is the venue gorgeous with fantastic viewing options, but people love to be able to say that they played at Harvard. It's such an iconic Boston institution,” Losey said.

For the first time in 2019, the Boston Tennis Classic was awarded a Masters Series designation, which gives players the chance to earn more points on the GLTA World Tour and further their chances at competing in the year-end championships.

“The Masters Series designation was a huge boost for the tournament. We saw a 70 percent increase in registration, and it helped us to promote the event and attract additional sponsors,” Losey said. “We really took this opportunity to pull out all the stops with things like high-quality polo shirts for players, moving the banquet to a nice location and hiring entertainment for that event.”

The 2019 tournament ran from Friday through Sunday and featured 13 men’s singles and doubles events broken down by age and NTRP ratings.

“This tournament feels like a family reunion because many of the participants play several GLTA tournaments throughout the summer and have been supporting the organization for years. Roman and Ryan work tirelessly throughout the year to make this event awesome, and that extra effort really shows in the little details,” said Yasmine Osborn, USTA National Manager of Diversity & Inclusion, who attended the event.

“We’ve had so many folks involved who have given us tremendous support and have really enabled us to make this tournament first class. Among those are Matt Olson and USTANE, USTA National and Mike Mercier, Harvard Tennis Director, and we are so grateful for their continued support along the way,” he said.

“We’ve been supporting the Boston Tennis Classic for five years now, and this is a really cool opportunity to host one of the most popular stops on the GLTA tour each year in New England,” said Matt Olson, USTANE Executive Director and COO. “You can tell by the excitement in and around the tournament that Ryan and Roman are some of the most well-liked and respected tournament directors, and they are the real stars behind this event.”

The Boston Tennis Classic is also one of 10 GLTA tournaments per year that USTA National sponsors.

“In order to promote and develop the growth of tennis, it is imperative that people be able to see themselves in the game. As the National Governing Body of tennis, it is our responsibility to break down barriers to entry into the sport. Partnering with the GLTA and supporting their programs and tournaments is intended to support their expansion and bring more players into the game,” Osborn said.

“I am absolutely amazed at how much of a supportive and caring community the GLTA is. People are constantly thanking us, helping us clean up, laughing and congratulating each other on wins,” Losey added. “I think the visibility of having a gay tournament at Harvard is very important. Michael (Mercier) took it upon himself to buy a rainbow flag and fly it high above the courts, making it was visible throughout the whole athletic complex. Having such a prestigious organization show it's support like this was so affirming for me, Roman and our players.”

For more information on the Boston Tennis Classic, click here.