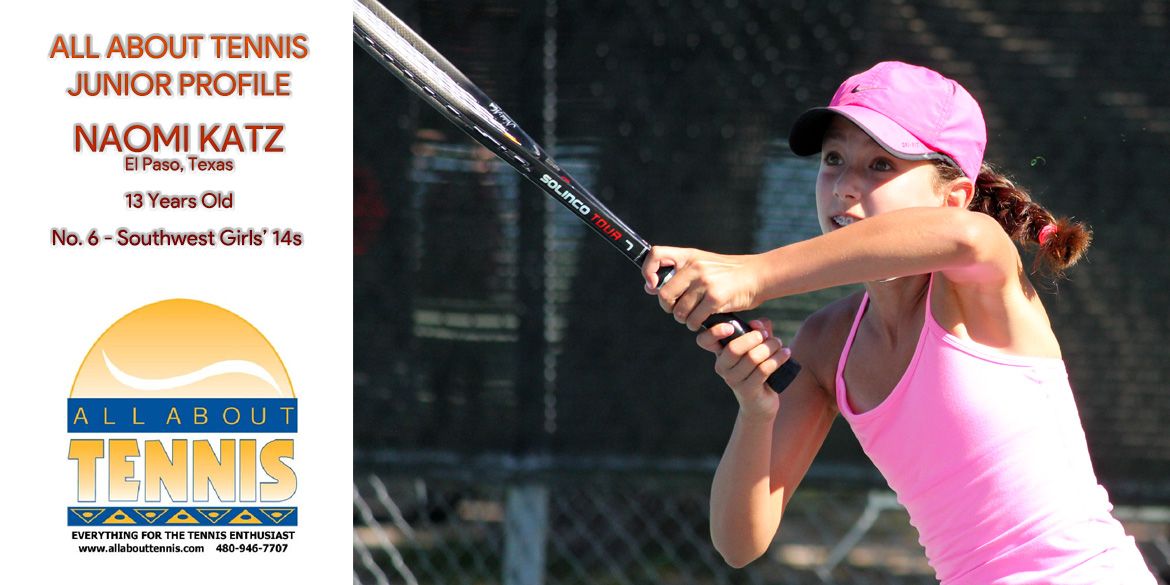 Thirteen year old Naomi Katz is our latest junior to receive the All About Tennis junior feature treatment. This young girl from El Paso has been a steady player in Southwest events, getting the tennis bug from older brother, Ethan Katz, also a Southwest junior player.

We caught up with this young El Pasoan to learn a bit more about her.

USTASW: How did you get started in tennis?

NK:  I started playing tennis because my older brother played Ethan played...and because it was a lot of fun.

USTASW: What has been your best tournament experience since you started competing?

NK:  My favorite tournament by far is Zonals because it is so much fun to play on a team and play with my close friends.

USTASW: What was your very first USTA tournament? How old were you? How did you feel approaching the match?

NK:  My very first tournament was when I was 8.  I can’t remember how I felt but I do remember having someone to help with score.

USTASW: What is your ultimate goal with tennis?

NK:  My ultimate goal with tennis is to play Division I tennis at Michigan.

USTASW: What do you most like to do when you're not playing tennis?

NK:  When I am not playing tennis I like to hang out with my friends, shop, and I love to read.

USTASW: Who is your favorite tennis professional?  What would you do if you were to meet them?

NK:  My favorite tennis professional is Venus Williams because she has overcome so much adversity and is so humble.  If I met her I would probably faint!

USTASW: How often do you play tennis each week and what do you do to try to keep your practices fun?

NK:  I play tennis 5 to 6 days per week.  To make practice fun I play matches because I love to compete and I hate losing!

USTASW: Who or what has been your biggest role model or help in learning tennis?

NK:  My family has been my biggest support system because no matter win or lose, they are always there for me.

USTASW: What's been your best or favorite tennis moment so far in your young career?

NK:   One of my favorite moments was going to Easter Bowl and playing at Indian Wells Tennis Garden.

USTASW: Do you have any odd quirks or rituals on the court, like bouncing a ball five times before a serve or not walking on the lines?

NK:  When I am playing and if I miss a first serve, I never serve the second serve with the same ball because I have always thought it was bad luck.


ALL ABOUT TENNIS has been a proud and longtime sponsor of USTA Southwest tennis programs, and is the largest retail tennis store in the Southwest. Open since 1992, the store is run, managed and owned by a tennis playing family.

To find out more about All About Tennis, visit them at their store in the heart of Scottsdale, online at allabouttennis.com on Twitter, Facebook or e-mail allatennis@aol.com